Took me a little bit to get this written up, but I finished up weeks 9 and 10 of StrongLifts. 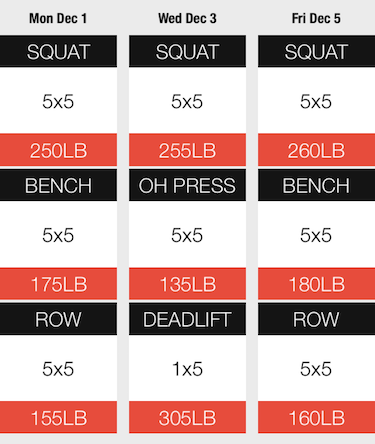 Whole bunch of milestones this week.

First up, I finally hit 135 on my overhead press, which means I’m up north of a full plate (45lbs on each side). This lift is really starting to push it for me. I’m happy that I’m finally over a full plate for all of my lifts, but I think I’ll start failing here before too long.

I also crossed the 300lb mark for Deadlift. I didn’t cross into 3 plates (315lbs) until the next week, but crossing over 300lbs means that I cross the arbitrary mark that I set for myself where I start using a switch grip instead of a double overhand grip for deadlifts. Next stop: 405.

Maybe the biggest victory for me this week was breaking the 250lb mark that I used as my 5 rep max back in week one. So that feels fairly major. I can’t say if my one rep max has jumped over the course of this program, but I feel like I have a lot left in the tank, even after crossing this milestone. So that’s probably a good sign. I think I should test my one rep max after these initial 12 weeks are over.

On the flip side of the coin, I started experiencing some knee pain in my right knee this week. I have horrible mobility in my hips and ankles. Always have. It’s something that I’ve been fighting against basically my entire life. On that 300lb deadlift, I noticed that my right knee was far from stable. Getting down into the starting position felt really shaky. I’ll come back to this in a bit.

This marks the (recorded) high watermark thus far, even though I’ve done another week since. I actually did another workout the following Tuesday, hitting 265 in my squat, but I missed the rest of the week, and so I ended up tossing the workout. Following the StrongLifts plan, I deloaded 10%, and came back for week 10: 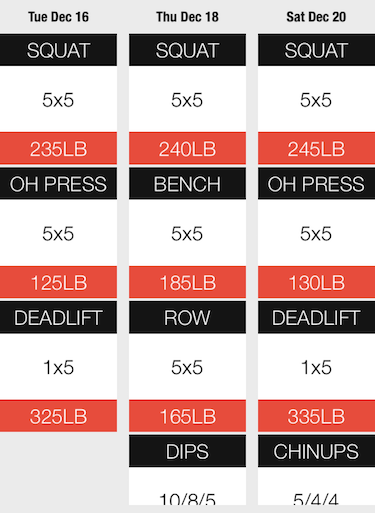 Ok, so I didn’t deload everything. I didn’t want to drop back below 300 on deadlift. So there’s actually no record of me hitting 3 plates, instead it looks like I just jumped past 315 and went straight to 325. I still have enough room with this lift that I feel comfortable forging ahead.

The StrongLifts iOS app also added arm work this week. They… didn’t update their layout code unfortunately. The fact that those boxes are cropped in the screenshot wasn’t a mistake on my end, that’s just what it looks like on the device. Super fun.

The arm work adds 3x10 dips to the A workout (squat, bench, row), and 3x10 chinups to the B workout (squat, press, deadlift). The way you’re supposed to do it is max unbroken sets, up to 10 reps. Rest and repeat. I’ve been doing all 10 reps each set, but only scoring the unbroken ones. So for example, that 10/8/5 score on Thursday means I hit 10 unbroken, then 8, then

The arm work is a real ego buster. I realized how much I suck at chinups today. It’ll be nice to watch this progress.

Following up my knee issues from earlier, I had a minor breakthrough with my squat stance on Thursday. I finally let myself widen my stance about another inch. This puts my feet just outside shoulder width, but also means that my feet don’t get knocked out to the side because of my poor mobility. That keeps my arches from collapsing, and prevents me from putting as much stress on my knees. It’s probably the most stable I’ve ever felt squatting before. I’m still going to fight for better mobility, but it’s nice to know that I don’t have to injure myself to keep progressing.

Like I said, with the exception of deadlifts, I deloaded everything by 10% for this week, so there aren’t really any big milestones here. Week 11 will look a lot like week 9 did, and then we’ll hit some new milestones during week 12.